How Much Alcohol Remains In Cooked Food?

We've all heard that when you cook with wine, all the alcohol "boils off," rendering your final dish innocuous. But is the conventional wisdom true?

In short, no. It is true that alcohol boils at a much lower temperature than water (173 degrees Fahrenheit, compared with 212 degrees Fahrenheit), but all that means is that the alcohol in a dish will begin to evaporate ("boil off") before the water does. How much alcohol is left in your finished dish depends on three things: heat, time, and the concentration of alcohol you started with. All three factors have a role in evaporating the booze from your dish. So, for example, a flambéed dessert will end up with more alcohol than will a long-simmered tomato sauce with red wine.

A 1992 study by food scientists from Washington State University, the University of Idaho and U.S. Department of Agriculture cooked with wine and sherry (all in the name of science, of course!) to find out exactly how much alcohol is evaporated during normal cooking. Here's a chart that summarizes what they found: 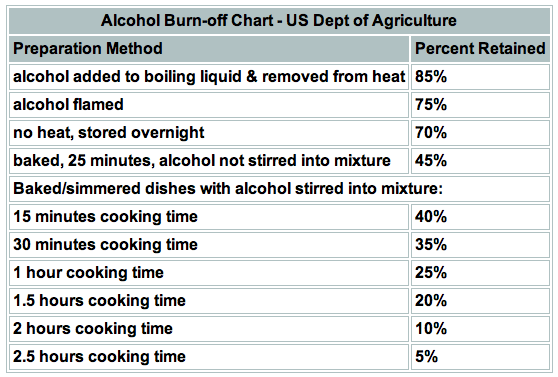 The take-home message? It can take up to three hours to simmer almost all the alcohol out of a dish. But don't worry--there's still not nearly enough to get anyone tipsy, unless you're pouring bottles of wine into your food, and eating huge portions. Wine is only about 13% alcohol or so. If you're adding a cup of your favorite red to a pasta sauce, then simmering it for an hour, your finished dish has only 1.56 teaspoons of alcohol in it. Divide that into four servings, and each dinner guest is imbibing in a mere 0.39 teaspoons--hardly enough to accidentally get them drunk. As for the wine you serve with dinner, that's another story!