Ever been captivated by the beautiful mosaic of colors in stained glass windows?  Are wine bottles not, also, often made of colored glass?  Mesmerized by the similar, beautiful glow, retired geologist Richard Pim decided to create a dazzling stained glass window-like structure using wine bottles.  According to Richard, “One day I sat in the garden drinking a glass of wine, and as I held the bottle up to the sun it made an amazing sparkly effect. I thought ‘that’s it, I will make it out of wine bottles’.”

Richard’s structure, an eleven foot high dome, rests in his garden (open to the public) in Pembridge, between Leominster and Kington in Herefordshire, England.  Pembridge’s recorded history goes back over 800 years, and it has often been called called The Jewel in the Crown.  On a bright, sunny day, Richard Pim’s wine bottle dome looks just like such a glorious jewel.   When asked about how he obtained the wine bottles necessary for the project, Richard replied, “I had no problems getting hold of bottles. Most of Herefordshire knew what I was doing, so I have had lots of donations. I have also drunk a good few myself.”  Though the structure is predominately emerald green, bursts of red, yellow, blue, and other colors abound.  “The bottles are all different colours, but the hardest to get hold of are blue ones,” reported Richard.

In the United States, The Minnie Evans Bottle Chapel in Wilmington, North Carolina was created from 4,000 bottles.  (The bottles, however, are not limited to wine bottles.)  Though not as translucent as Richard Pim’s construction, the Chapel, built by Virginia Wright-Frierson in 2004 as a retreat, attempts to mirror the natural light, color, and shape of its surroundings.  The interior even contains a sculpture of a tree.  If a visit to England is not in your immediate timeline, the Minnie Evans Bottle Chapel is certainly a closer sight.

So, the next time you finish a bottle of wine, have a look at the bottle.  Perhaps it may inspire you, too, to create a shimmering work of art? 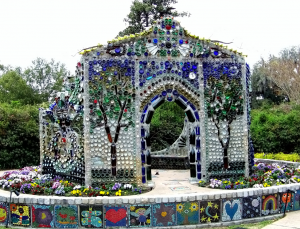