Sherry: Is it for the Kitchen or the Bar? 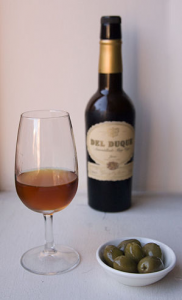 This morning, I picked up a bottle of sherry for dinner tonight.  Not to drink, but to cook with.  But then it struck me: why was I abjuring it from my glass, and banishing a cup to the soup pot and the remainder to a slow death in the cupboard?  Sherry is wine, after all.  Why don't we drink it?

It's not like sherry has always been denied a place in the bar.  In the 70s, twice as much was exported as is today.  It comes from the far south of Spain, near a town called Jerez.  Here extreme summer heat meets cool Atlantic breezes, creating the perfect sherry-making environment.  The soils in the region are chalky and preserve moisture well.  There are three grapes grown here for Sherry-making: Palomino, Pedro Ximénez, and Moscatel.  Approximately 90% of the grapes grown for sherry are Palomino grapes, which produce a very neutral, crisp wine, a blank canvas upon which production paints sherry's distinctive flavors.

In production, the wine is put in barrels (called "butts" in sherry-making).  A large amount of space is left in the top of each butt, giving yeasts the opportunity to collect, grow, and add their flavors to the final product.  After fermentation, brandy is added.  This step was originally introduced in the 1400s, so that the sherry wine wouldn't rot during the long, hot voyage to the New World.  Now, it's the essential step in the process, and what makes sherry a "fortified wine."

Sherries come in a variety of styles.  Some are dry and light, some heavy and sweet.  The two main types are Finos, which are very dry with a light body, and Olorosos, which still fall on the drier side but are much heavier and more flavorful.  Also available are Manzanilla, Palo Cortado, Sweet Sherry, Cream Sherry, Pedro Ximénez, and Amontillado, (yes, the Amontillado made famous by Edgar Allen Poe).

Sherry is currently experiencing a resurgence in popularity.  Many wine experts think it's under-appreciated.  Sherries pair well with cheeses and desserts, or as aperitifs.  They are usually served in copitas, small, tulip-shaped glasses.  This shape is ideal because of the sherry's high alcohol content--the small opening of the glass limits the alcohol fumes that reach the nose, allowing other flavors to come through (and the small size keeps you from drinking too much).  If you're willing to give sherry a try with fresh taste buds, pick one up today!  If you don't like it, you can always use it for cooking--many soups and sauces, especially tomato-based ones, call on sherry to add richness and depth of flavor.