Ahh, Sangiovese.  Despite its delightfully Italian name (which, incidentally, gives you a great opportunity to do your best Godfather impression), Sangiovese is a great wine that has been loved for a long time.  The first literary reference to Sangiovese was made in 1722, but it is most 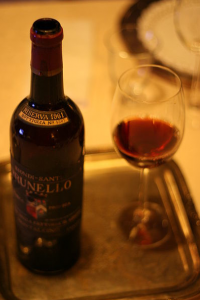 likely much older than that.

Sangiovese is a bit similar to Chianti, because Chianti is made from 70% Sangiovese grapes.  Here's a handy analogy: Sangiovese is to Chianti as Cabernet Sauvignon is to Bordeaux.  (OK, that was a mouthful.  But it's still a handy way to think about the relationships between these wines.)  Both Sangiovese and Cabernet Sauvignon are made solely from grapes that are most often seen as a component of mixed-varietal wines.  But alone, they make great wines too.

Sangiovese grapes have thin, delicate skins and can easily rot if exposed to the damp.  As a result, they thrive in a hot, dry climate, and so are very popular in Tuscany.  But because it's so easily influenced by climate, the sangiovese grape takes careful and knowledgeable cultivation.  The quality of Sangiovese varies from vino di tavola at the lower end to the best classico superiore.

In flavor, Sangiovese is a fruit-forward wine.  Often, flavors of blueberry, cherry, strawberry, violets, and plums are evident, and Sangiovese can often have a faint floral aroma.  Sangiovese isn't as bold as, say, Cabernet Sauvignon--it's generally medium-bodied, moderately tannic and moderately acidic, but can range to assertive and robust with a slightly bitter finish.  Because of its balanced, smooth character, Sangiovese pairs well with many dishes, making it great to share at a restaurant with people who are eating different entrees.  Try it with chicken, red meat, fish, pastas, and even cheeses.