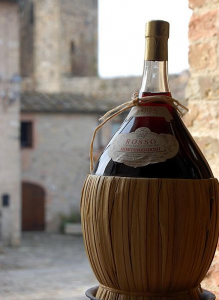 Chianti used to be regarded as an inferior wine.  But in the last 40 years, this simple red has undergone what might be bigger changes than any other varietal out there.  Chianti is made mostly from Sangiovese grapes: one of the hardest kinds of wine grapes to grow.  In the past, growers over-cut the Sangiovese vines, and also mixed the resulting wine with other varietals (some Chiantis were only 50% Sangiovese) led to a shoddy product: Chiantis were often low in taste and too acidic.  In the '80s, Chiantis experienced a revival.  Superior Sangiovese grapes were rediscovered, and regulations became more stringent (now, a Chianti must be at least 75% Sangiovese, and the remainder must be an approved varietal).  As a result, today's Chianti is a much better product than it used to be.  Many Chianti brands have also lost the traditional straw basket in favor of a sleeker, re-vamped look.

Chianti is the traditional wine of Tuscany.  Tuscany, which lies in the hilly country between Florence and Siena, has been producing Chianti for 700 years.  Today, seven areas of Tuscany produce Chianti: Classico, Colli Aretini, Colli Fiorentini, Colline Pisane, Colli Senesi, Montalbano and Rùfina.  Chianti produced in the central Classico area is traditionally regarded as the best.

Chianti is a strong, bold wine: very dry and tannic.  It pairs well with foods with strong spices or flavors; it will overwhelm a dish that's too delicate.  That said, it's great with a huge variety of foods, like pork, chicken, and beef, but obviously, its classic pairing is with Italian food.  Chianti was made to be drunk with pasta, and pizza.  And despite its recent improvements, most bottles are still relatively inexpensive, meaning that you can snap up a great bottle for a wallet-friendly price.

Chianti isn't a crowd-pleaser, like a Merlot or a Chardonnay.  It's more of an all-or-nothing wine: some like it, some hate it.  Which side of the fence do you fall on?