I'm going to spend the next few minutes convincing you of the truth of this article's title, and I'm going to do it using two real life men and two fictional characters. 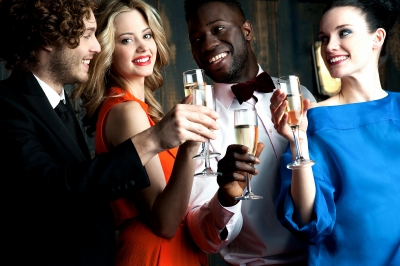 Before we start though, some men might not even know exactly what champagne is.  In a nutshell, it's wine, but wine from one very particular part of the world - Champagne, France.  Only sparkling wine produced in this region can call itself Champagne.   There's nothing else quite like it in the world, which is why it gets its own designation. Light and bubbly, usually pale gold or pink in color, and with deliciously complex flavors of fruits and notes of vanilla, spices and biscuit,  it is in many ways the perfect drink.   Slightly sweet or bone dry, it can go with almost any meal, including intimate breakfasts, and is known the world over its association with both celebration and seduction.

Champagne is for lovers

Let's talk about seduction for a moment, because that's something that real men do. Some of our most beloved manly characters in movies are archetypes for people in the real world. Sort of a pumped up version of what all men wish they were.  So my first fictional “real men” witnesses are James Bond, the devastatingly attractive secret agent 007,   and Nickie Ferrante, the lead character from the movie “An Affair To Remember,” which is widely referred to as the most romantic film of all time.

Yes, I know that many people have played James Bond, but let's face it, there's only ever been one real Bond (Sean Connery) and one fairly close second (Daniel Craig). Both of these men are regularly seen sipping vintage champagne, usually before and during the seduction of a beautiful woman. It's not hard to connect those dots.

In the case of Nickie Ferrante (Cary Grant), has there ever been a man more perfectly suited to drinking champagne? And pink champagne no less.  Cary Grant, and Sean Connery provide an authoritative yes to the question of whether or not real men drink champagne.

But I hear you. Those are both fictional characters after all. Archetypes, yes, people we men maybe wish we could be, but fictional nonetheless. What about real men who have actually walked the earth and loved champagne? Are there any examples?

There are actually countless, but I'll give you two. It would be hard to describe the author of The Great Gatsby as anything other than a real man, not to mention a towering literary genius, and when F. Scott Fitzgerald and his wife weren't enjoying Gin Rickeys, they were lifting glasses of sparkling champagne in celebration.

Maybe you don't regard Fitzgerald as manly enough though, and if so, I've got the nuclear bomb of manliness for you. Ernest Hemingway.  He's at least as well known for his drinking as his writing. They don't get manlier than Hemingway.  Do you know what his favorite drink was?  A Mojito.

You might be thinking that his favorite drink has nothing to do with champagne, but you'd be wrong. In order to punch it up a notch, he was in the habit of subbing out boring club soda with champagne.

You read that correctly, Hemingway was an ardent champagne drinker. Next time someone tells you that real men don't drink champagne, show them this list. Then order a bottle of beautifully chilled vintage Dom Perignon, raise your glass at your beautiful companion, and just smile.