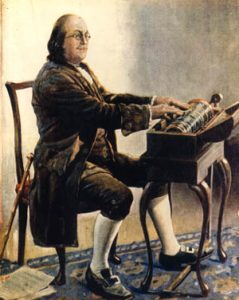 When was the last time you ran a moistened finger along the rim of a crystal wine glass, making it sing?  Perhaps, after reading this post, you’ll give it a try tonight! Concerts of “glass music” produced by this same technique used to be all the rage in Europe.  There were even performers, like the blind Marianne Kirchgessner, with entire careers that consisted of playing musical glasses.  Benjamin Franklin, after attending such concerts in London, invented and perfected the “Glass Harmonica,” an instrument made of concentric glasses mounted on a rod, turned by a treadle, the size of each glass determining its pitch.  Touching the rims of the turning glasses produced audible notes, and several glasses could even be touched simultaneously to produce chords.  Although it was something of a novelty instrument, many prominent composers wrote music for it, including Beethoven and Mozart.  In fact, Mozart’s Adagio for Glass Harmonica, K.365, is one of the last pieces Mozart composed. But, like the clear beverage craze in the early 1990’s that faded by the middle of the decade, the glass harmonica’s popularity came to an end around 1815, with few instruments built after 1820.  Today, there are special manufactures who do make glass harmonicas, but professional glass harmonica players are very rare.  Still, the ethereal, haunting, otherworldly sound of the glass harmonica can be heard in several films, including Interview with the Vampire,  Mesmer,  Star Trek VI: The Undiscovered Country, and popular recordings like Björk’s “All Neon Like”.  If you want to know what this instrument sounds like, all you need to do is run your finger across the rim of a wine glass.  Crystal wine glasses, like those produced by Riedel, often work best.  Be sure, however, that you use a glass with a stem, otherwise the hand holding the glass will stop the tone.  Have fun!