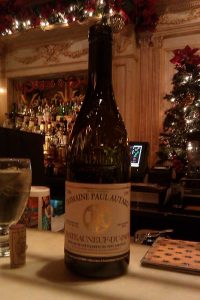 If you're looking for a great French red to fall madly in love with this winter, look no further.  The Domaine Paul Autard Châteauneuf-du-Pape has got it all.

The French are known for their love of terroir, the distinctive taste and aroma characteristics of an area.  In the case of their beloved Châteauneuf-du-Pape, the terroir is highly unique.  Embedded in the soil of the Châteauneuf-du-Pape region is a layer of pebbles, mostly quartzite, brought there by ancient glaciers.  The rocks retain heat that they release during the cool nights, keeping the vines from getting too chilly.  They also help the soil retain moisture during the hot summer months, keeping the vines from getting too thirsty.  It is because of these rocks in the dirt that the region is so renowned.

And it's no surprise that the wines of this region have a distinctive terroir.  Paul Autard's 2006 Châteauneuf-du-Pape is a rich, 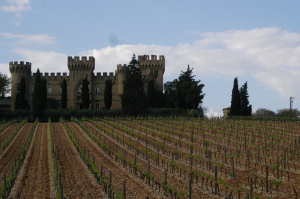 medium-bodied wine with background tastes of spice, leather, cinnamon, and tobacco.  But the strongest taste is one of earthiness: a mineral-and-soil taste that makes you think of being outside in the warm sun.  It's such a distinctive taste that the drinker gets a sense of the place the wine came from, a place of crumbling castles, châteaus, and miles of sunny vineyard, even without ever having been there.

This is a delicious, opulent wine that I'm sure you'll love.  Store it in your cellar to age to greatness for 7 years or so, or if you can't help it, crack it open now and take a miniature trip to France.