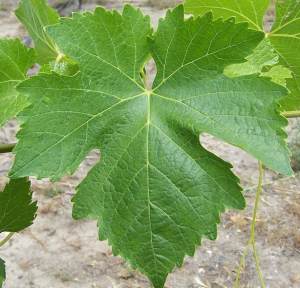 It's still hot outside, but it won't stay that way for long.  Soon, fall will be here, and its chilly breezes will make you crave wines that are deep, rich, and robust.  One perfect wine for fall?  Syrah, sometimes called Shiraz.

Syrah or Shiraz is a very dark wine grape--almost black in color--that produces bold and rich wine.  Syrah grapes have long been grown in the Rhone region of France--the first vines were likely planted around 600 BC.  Great Syrahs, along with Viogniers, have been cultivated in this region ever since; in fact, about half the Syrah grapes in the world are grown in France.  Syrah is also grown in many other parts of Europe, as well as Argentina, Chile, New Zealand, Uruguay, and the United States.

It's also widely grown in Australia, but there, as well as in Canada and New Zealand, it's called Shiraz.  Since Syrah was the original name, on this blog, that's how we usually refer to it.

Syrah is used sometimes alone, sometimes in blends.  It makes the famous wines of Côte Rotie and Hermitage, as well as playing the major role in most Rhône blends, including the famous Chateauneuf du Pape.

Syrah makes very dark, blackish-violet wine.  Syrah wine has a bold, rich flavor and a heavy, chewy texture.  It tastes more of spice than fruit, with clove, thyme, bay leaves, and black pepper commonly noted flavors.  From the terroir, or soil it's grown in, it can attain flavors of earth or even truffles.  Syrah is often a great candidate for aging, and some years in the cellar will impart to it secondary and tertiary flavors of rich wood, tobacco, and smoke.

When pairing Syrah with food, you'll need to serve something with strong flavors to match up to the intensity of the Syrah.  Grilled red meats like lamb work well, or try it with an intensely herbed and perhaps spicy sauce.  Syrah is perfection when its deep, rich flavors are allowed to play off of something rich but simple, like grilled sausage and mustard.  So as the weather starts turning colder this year, start thinking about Syrah.