If you haven't yet ventured into Spanish wines, it's time you start.  Spain has more acres devoted to wine grapes than any other country in the world.  They don't produce as much wine as some other countries because of their obsession with quality.  They don't force plants to produce over their natural limits, and they don't overcrowd their vines.  Spain has long been known as one of the world's best wine producers, and its region of Rioja is particularly well-known. 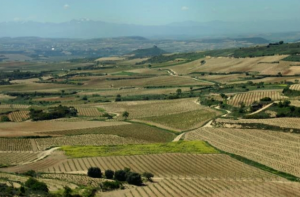 In 1635, the mayor of a town in Rioja passed a decree banning carriages from driving on the roads next to wine cellars, for fear that the vibration would disturb the aging process and harm the wine.  Rioja's attention to detail hasn't waned much since.  Rioja has three main wine-producing areas, each of which has a different environment and so contributes a unique style of Rioja wine.  Rioja Alta, with its high elevation, and resulting shorter growing season, produces wines in the "Old World" style.  Its wines are fruity and light.  Rioja Alavesa has a climate much like Rioja Alta, but much poorer soil quality which necessitates that the vines be planted far apart so that they won't be competing for nutrients.  Wines from this region are more acidic and full-bodied than those from Rioja Alta.  The third region, Rioja Baja, has a warm and dry Mediterranean climate.  Wines from this area are characterized by intense colors and can often be very high in alcohol content.  These wines are most often used in blends.

Rioja wines can be red, rosé, or white.  Red Riojas are the most common, and for good reason: these wines are classic and bold.  They are usually blends primarily made up of Tempranillo, which is a dark red wine that has flavors of dark berry, plum, leather, and herbs.  Garnacha Tinta, Graciano, and Mazuelo are other grapes that are often incorporated into red Riojas.  Red Riojas age well, with time mellowing their tannins and bringing out their subtle fruity flavors.  Steak is a classic food to pair with red Rioja.

Rosé Riojas are made primarily of Garnacha grapes (called Grenache in the US), which are bold and spicy.  Rosé Riojas are bright pink in color, and make for a great summer wine that is both refreshing and flavorful.  Try rosé Riojas with grilled chicken or seafood.

White Riojas are very light in aroma and flavor.  They are similar to a Pinot Grigio, but with a slightly more tart, crisp quality.  White Riojas are very delicate and refreshing.  Try them with foods with subtle, delicate flavors that you don't want to overwhelm.  Foods with citrusy flavors goes especially well with the tart characteristics of white Rioja.  Try a one with pasta with a lemony white wine sauce.

Of course, all three kinds of Rioja pair best with Spanish food.  Want a unique party idea?  Have a Spanish party!  Serve all three kinds of Rioja along with different tapas.  Tapas are often very simple: some common ones are shrimp grilled in garlic, skewered lamb, and bread with aioli.  Your guests will be able to chat and nibble and you won't have the stress of preparing a sit-down dinner.  Best of all, comparing the different Riojas will give your guests something to talk about!

Riojas are always labelled for quality (wouldn't it be nice if all wines were?)  The quality mark will often be on the back of the bottle.  The simple label "Rioja" signifies that the wine is the youngest available--it's been an oak barrel less than a year.  "Crianza" means that the wine has been aged for at least two years, and spent at least one of those in oak.  "Rioja Reserva" signifies that the wine has been aged for at least three years, one of which in oak.  And the highest quality Riojas are labelled "Rioja Gran Reserva" and have been aged for a minimum of two in an oak barrel and at least three in the bottle.  The last two types of Rioja are only produced in good years.

Give Spain's attention to quality a test for yourself!  All three kinds of Riojas are great, enjoyable wines that are easy to pair with lots of dishes.  Happy tasting!