Tips for Cooking with Wine 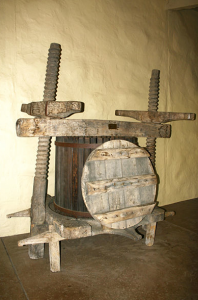 I love to cook with wine.  But I admit it, sometimes, pouring a cup or a bottle of perfectly good wine into the cooking pot can seem a little sacrilegious.  Is using your good wine in your food worth it?

In a word, yes.  Wine imparts a richness and depth of flavor that is simply hard to come by any other way.  When making sauces, soups, or stews, many recipes call for you to deglaze the pan.  This takes place usually after some meat has been browned (cooked at high heat in some kind of fat until the skin is crispy).  The meat is removed, most of the fat is poured off, and the heat is turned up high.  A generous splash of wine is added, and as it boils, the cook swirls and scrapes with a wooden spoon or spatula, getting the little browned bits unstuck from the bottom of the pan and incorporating them into the dish.  Tons flavor resides in those little brown bits, and deglazing the pan incorporates their taste into the finished dish.  You can use stock or even water for deglazing, but wine adds a rich, unctuous flavor that can’t be replicated by anything else.

Wine isn’t just used for deglazing.  A splash of wine added to a reducing sauce gives it that same deep, rich flavor that we desire when we’re cooking and eating.  The next time you make tomato sauce, try adding a splash of wine (usually half a cup to a full cup) before letting the sauce simmer and reduce.  You’ll be amazed at the richness and flavor it adds.

Wine is also great for marinating meat.  A red wine marinade is a natural partner for beef, as the tannins in the red wine interact favorably with the meat’s fats.  The acid in wine really breaks down the connective tissue in meat.  This means that marinating a tougher cut of meat in wine can really tenderize it, as well as adding flavor to it.  One of my favorite cuts to use this technique with is flank steak.  Flank steak is a thin, tougher cut, but it packs a lot of flavor.  Best of all, it’s inexpensive, usually comes in pieces big enough to feed an army, and sliced thinly, the leftovers make great steak sandwiches.  Try seasoning a flank steak with salt and pepper, and throwing it in a large Ziploc bag with a few garlic cloves, a splash of olive oil, and enough wine to thoroughly soak it.  Let it hang out in the refrigerator for several hours, turning every once in a while to make sure the wine is evenly distributed.  Then simply grill and serve.  This steak is great paired with the same wine used in the marinade.

I don’t set much store by those chefs that advocate using only high-quality wine for cooking.  I think that the flavors are so diluted by the flavors added by the food, and changed by the chemical processes that occur during cooking, that spending a lot of money on wine that you’re just going to dump in the pot is kind of a waste.  You do want to use decent wine that you would drink—avoid those cooking wines sold in the grocery stores—they are highly acidic, and have tons of preservatives, which simply don’t taste good.  They are often also highly salty, which can alter the flavor of the food you’re cooking so much that you ruin the taste.

Cooking is a great way to use a good wine that’s been sitting around for a day or two.  Its optimal drinking window has passed, but that doesn’t meant that all those great flavors should go to waste.  Don’t use a wine that tastes vinegary or rancid, or your food will taste that way too.  But something a little past its prime should be fine.

Cooking with wine isn’t just for the experts.  There are lots of simple ways to incorporate it into your dishes.  And when you’ll do, you’ll find that wine adds so many wonderful, subtle flavors that you’ll never want your kitchen to be without it again.