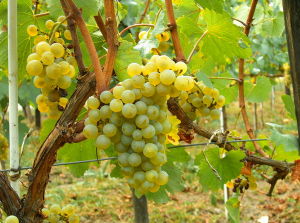 As the days start to be sunnier and the nights begin later and later every day, I start to long for the things that say 'spring' to me, like asparagus, apricots, and sandals.  And after months of craving nothing but Cabernet and Pinot Noir, I start to want something different: something light enough to remind me of the sun, and robust enough to drink with the hearty pastas and roasted chickens I'm making right now.  So let's talk about the perfect choice for early spring, and the world's favorite white wine: Chardonnay.

Chardonnay grapes, which can trace their evolution back to France's Burgundy region but are now grown in vineyards in California, New Zealand, and everywhere in between.  Chardonnay grapes are very neutral in flavor, and, kept protected from other influences, the resulting wine can be very delicate-tasting.  But their neutral flavors are easily dominated by other flavors, mostly those of the terroir (local soil), and oak barrels Chardonnay is most often aged in.  As a result, Chardonnay flavors range across a broad spectrum.

Kept free of outside influence, Chardonnay is perhaps best described as crisp and fruity: its delicate natural aromas are of lemon, pears, and apples.  Oddly, many Chardonnay drinkers don't associate these kind of flavors with Chardonnay.  This is because it's such a good vehicle for other flavors.  By aging Chardonnay (or more often, by treating it with malolactic fermentation), it develops a distinct buttery flavor that is decadent and satisfying.  Chardonnay is often aged in oak barrels; this is to allow the tannins in the oak to produce a vanilla flavor in the wine.  As Chardonnay grapes have begun to gain popularity  in cooler climates, the original "crisp and clean" Chardonnay is gaining in popularity.

Chardonnay is generally a very forgiving wine that can be paired with many different dishes, so it's a great idea to have a few extra bottles in the cellar or wine refrigerator for easy pairings.  It goes well with seafood, poultry, and pasta dishes.  Pair the lighter citrus- and tropical fruit-flavored bottles with foods with more delicate and subtle flavors: halibut, for example, or spaghetti with lemon and spring vegetables.  For dishes with deeper, richer flavors, like roasted chicken or cream-sauced pastas, drink a richer Chardonnay with buttery notes.   Older, more mellow Chardonnays pair well with dishes dominated by earthy flavors, such as mushroom soup or cheese.

Regardless of which style of Chardonnay is the "proper" one, there's no doubt that this delicate-yet-rich wine is here to stay.  And good thing too, because what else would we drink in the spring?