The Most Expensive Bottle of Wine Ever Sold

Interestingly, arguments rage as to what was actually the most expensive bottle of wine ever sold. You need to take account of inflation. There are private sales which are just rumored, of fabulous, near mythical wines which never reach the open market. Then of course, we need to make a distinction for size, and between red and white, and perhaps, discount those wines which have interesting associations, such as having been owned by a famous person, where the association is more important than the wine.

Here then are some of the contenders: 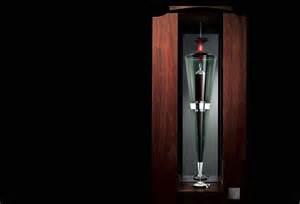 This is a limited edition of 12 handmade bottles offered by Australian store LCBO. The wine contained within the handmade bottle, which is itself contained in a meter high wooded case made from rare Australian hardwood, is a 2004 Kalimna Block 42 Cabernet Sauvignon; a delightful wine indeed, but worth $168,000? Three bottles have so far been sold, and it seems unlikely that the wine will ever be poured from these extravagantly crafted, hermetically sealed bottles, looking for all the world like a plumb bob, made from gray glass. An ordinary bottle of this vintage sells at around $1000 – look like a bargain, doesn't it?

A bottle of Chateau Lafitte 1787 was sold in 1985 for $156,450, which considering that the bottle life of red wine cannot be more than fifty years at most, is a lot of money to pay for vinegar.

But wait! This bottle came from the cellar of one Thomas Jefferson, a dedicated wine lover who learned about good wines whilst doing as stint as ambassador to France. And this bottle has the magic initial Th. J etched into it, giving it provenance.

This bottle of what is considered to be one of the world's finest clarets sold for a massive $310,700. So why isn't it the most expensive bottle of wine ever sold? Because it's not a bottle, it's the much larger jeroboam, so in fact, this is pretty cheap, working out at approximately $8,630 a glass, which according to those who have had the privilege of tasting this vintage, is worth every penny.

Another bargain at a mere $24, 675, this is the most expensive American made wine ever sold. Yes, wine making was alive and kicking in 1941, and this is considered one of the finest wines ever made in the US. According to Francis Ford Coppola, who now owns Inglenook, the wine had flavors of violets and rose petals; he was lucky enough, and of course, wealthy enough, to be able to actually open a bottle and drink it.

At $21,200, this is the most expensive bottle of champagne ever sold. And perhaps it's surprising that champagne doesn't top the list of most expensive wines. We are used to thinking of champagne as a luxury wine, but, it doesn't seem to evoke the depths of passion that the clarets and Burgundies inspire. And I think we've all been to clubs that seem to sell champagne at roughly that price!

For an entertaining account of the Thomas Jefferson bottle, check out
“The Billionaire's Vinegar” by Benjamin Wallace.