A Little Bit About Prosecco 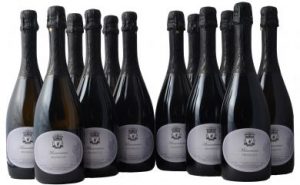 Prosecco is an Italian sparkling wine that is often made Dry or Extra Dry.  Unlike sweeter sparkling wines, today's Prosecco is intended to be on the drier side.  Though Prosecco is often used as a Champagne (or other sparkling wine) substitute, it has its own distinctive taste.  While Champagne and other sparklers are sought after for their complexity, Prosecco is manufactured to be lighter, fresher, and much more on the plain side; it works very well as a pleasant palate-cleanser between courses, and even between wines during select wine tastings.  Enjoyed chilled, like Champagne, Prosecco works as an aperitif on its own; however, it is frequently paired with hors d'oeuvres like bruschetta, canape, crostini, soft cheeses, stuffed mushrooms or shrimp, and even olives.

Unlike Champagne (whose second fermentation process occurs in the bottle), Prosecco’s second fermentation process occurs in stainless steel tanks.  This is one of the main reasons why it’s often less expensive than Champagne; it’s less expensive to produce.  Unlike other sparkling wines that do ferment in their bottles, Prosecco is meant to be consumed within three years, lest it become stale.  (Some higher quality bottles of Prosecco may be kept up to seven years, but if you’re in doubt, drink it while it’s young!)

To keep your Prosecco at the proper serving temperature, consider using a stylish wine cabinet like the Vintage Series Legacy Wine Credenza, or the Le Cache Wine Vault 3100.  Always remember to drink your Prosecco while it’s still young!