Oysters have, since ancient times, been regarded as potent aphrodisiacs.  While this belief may be partially attributed to myth and sympathetic magic, a group of Italian and American researchers found that oysters, along with certain other shellfish, are “rich in rare amino acids that trigger increased levels of [arousing] hormones.”  History’s most famous lover, Giacomo Casanova (1725-1798), were he alive today, would probably cheer at this finding; Casanova championed the idea that sharing succulent oysters was the best way to lead to an evening of sensuous delight.  But oysters don’t do it for all couples.  Some people love them, some don’t, and still others are allergic to shellfish.  But even if your companion can’t (or won’t) slurp down the smooth, slippery, succulent little sea critters, he or she can certainly share a good bottle of white wine with you while you enjoy them!
Because there are many kinds of oysters, you will find that certain whites pair better with different varieties.  However, there is one wine that goes with them all, swimmingly: Chablis.  Because its grapes are grown in France’s Burgundy region where the soil is rich with fossilized oyster shells, the aroma of Chablis contains limestone, peach, and (you guessed it) oyster shells!  Its flavor, too, often contains traces of sea salt.  If your lover is into literature, perhaps a passage from Hemmingway’s A Moveable Feast may help encourage him or her to partake with you: “As I ate the oysters with their strong taste of the sea and their faint metallic taste that the cold white wine washed away, leaving only the sea taste and the succulent texture, and as I drank their cold liquid from each shell and washed it down with the crisp taste of the wine, I lost the empty feeling and began to be happy and to make plans.”  The next time you order oysters, consider asking for a bottle of Chablis, too.  Enjoy! 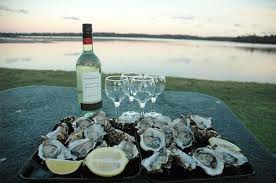