Contrary to what you may think after reading a recent article about wine “newbies” in Wine Spectator, Americans have been enjoying their wine for quite some time.  Historically, the first Europeans that explored this land dubbed it “Vinland” because of the massive grape vines they saw covering the terra firma.  In fact, the early American colonies included “wine making” as one of their goals in their founding charters.

The first commercial vineyard and winery of the infant United States, named First Vinyard, was established by an act of Kentucky Legislature in 1799 (Two oaken casks of wine produced at this site were sent to Thomas Jefferson in 1805).  Prior to this, Franciscan missionaries established vineyards in California, the first being near San Diego in 1769 (Yes, the toponym “California” was used on maps as early as 1562!).  And let us not forget about the wineries that appeared in the Finger Lakes region in 1860s, the Rocky Mountain wineries, and ones in the Midwest.  Today, in fact, there are almost 3,000 commercial vineyards in the U.S., and each state is home to at least one commercial winery, to say nothing of private wineries. 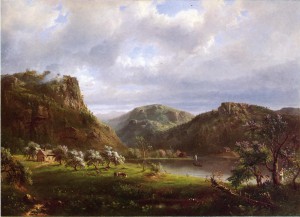 Given America’s rich wine history, how can it be that the author of the article in Wine Spectator calls Americans “newbies”?  Drawing on his own experience, he states, “Most of us didn’t grow up with wine. My parents never drank wine. Indeed, they didn’t drink anything alcoholic except an occasional cocktail at a party in order to be “sociable.” I’ll bet you anything that the same could be said for most of your parents, too—at least if you’re old enough to be in the Baby Boomer cohort.” The “Baby Boomer cohort” gives us clue about why the author’s parents may have adjusted to a life without much wine: Prohibition.  Following the repeal of Prohibition in 1933, America’s once thriving vineyards had deteriorated, left unattended for over a decade.  Expert winemakers had passed away, unable to pass knowledge of their craft on to their children, and thus a generation of people grew up unexposed to wine.  What took a few hundred years to develop was destroyed in the blink of an eye (okay, a decade!).  It took many years for commercial American vineyards to recover, reaching almost 3,000 in number by 2003.

After such a drought, it’s no wonder many American people were slow to imbibe after adjusting to a life without wine or spirits. Many families did resume drinking after Prohibition, but now they often bought inexpensive, less-than-ideal jug wines.  In many ways, because of the lasting effects of Prohibition, the claim that “Most American wine lovers are almost as new to wine as most Asian wine lovers” may not be far from the mark in some parts of this country, but the article does not address why this may be so, and also fails to inform the casual reader about America’s previously-rich wine history that is, once again, thriving (and nowhere more so than here in SoCal!).