“Contains Sulfites” is printed on most bottles of wine we purchase.  We may even know people who claim to be allergic to sulfites and abstain from drinking red wine.  (They often substitute a few glasses of white.)  Other people complain that the sulfites in all wines give them headaches; they avoid drinking wine altogether, preferring other spirits.

What is interesting, however, is that use of sulfur dioxide is not limited to wine production.  In fact, sulfur dioxide is commonly used in the food industry, partly because of its antibacterial nature!  Sulfite levels in wine are actually much lower than those found in the majority of foods we consume.  Pizza, fruit juice, jams, jellies, cookies, crackers, soda, flour tortillas, hash browns, and other common foods contain substantially high levels of sulfites.  So do prescription medications.  Although a small number of people genuinely suffer from sulfite allergies, the majority of us do not--we can eat pizza or pop a pill without developing a rash, itching, or swelling up.  However, many folks are still quick to point to the “Contains Sulfites” label should a headache follow a few glasses of red.

If you have not been diagnosed with sulfite sensitivity, chances are that your headache is not caused by your glass of red or white!  (Why white?)  Contrary to popular thought, in actuality red wines contain fewer sulfites than white wines. That’s right!  Less sulfur dioxide is required to protect reds because of the tannins these wines naturally contain. Though sulfites have often been blamed for causing headaches, many people choose to drink whites with higher sulfite levels to avoid headaches!  The headaches such people experience when drinking red wine are, therefore, not caused by sulfites, but might be caused by the tannins in red wine, which release serotonin.  And high levels of serotonin--the “happy” hormone--are known to produce headaches.  If tannins are really the issue, think twice the next time you have a bar of chocolate, cup of tea, or healthy soy snack; these foods are also rich in tannins!

Sulfites abound in the foods we eat daily, from pizza to processed potatoes, yet these foods do not display large  “Contains Sulfites” labels.  Dried fruit, alone, contains about ten times more sulfites than a glass of red wine.  If you consume dried fruit snacks and feel fine afterward, you probably do not have a sulfite allergy.  When it comes to wine, don’t buy into the sulfite hype. But obviously, if you experience frequent or severe headaches you should talk to your doctor. 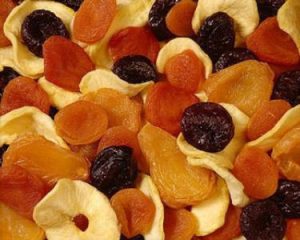