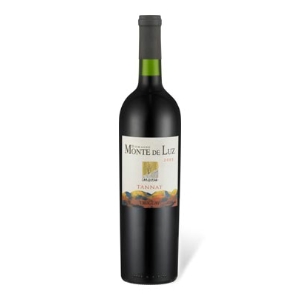 The Tannat grape is believed to have its origins in the Basque region; however, its use in winemaking is associated with the Madrian region in southwestern France.  One of the easiest varietals to grow, Tannat does quite well in South America, Uruguay in particular.

The  Tannat Domaine Monte de Luz 2008 is a very rustic wine with a nose that includes dark berries amidst prominent vegetables with a hint of earthiness.  This very opaque wine’s dark berry flavor opens to include traces of other complementary fruits.

The body is soft, with appropriate weight, and the finish is soft yet slightly acidic with exposed tannins.  Uruguay has been well known for the Tannats it produces, and the Domaine Monte de Luz 2008 does not disappoint.

Though lacking great complexity, this wine is a versatile sipper, making it a great complement to a variety of grilled poultry and even some hearty meats (Steak makes an especially good partner!). And if you’re sautéing onions, try adding a splash (or two) to the frying pan. The Domaine Monte de Luz 2008 even pairs well with spicy dishes, too.  Overall, I am pleased with the variety of food pairings to which this Tannat lends itself.  Having a few extra bottles on hand is not a bad idea!